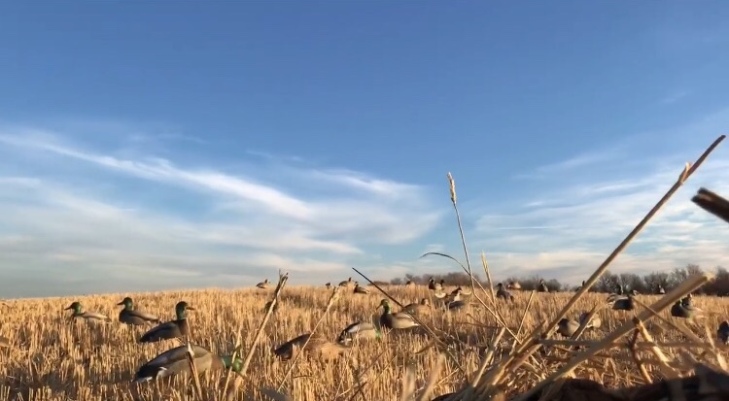 Gear trailer in tow, we set out in the morning for a field hunt that we had scouted the day before.  During our travels the previous day, we found a wheat field surrounded by large stands of timber that showed stacks of mallards and large Canada geese loafing and feeding in the center.  We unloaded our rig and gave ourselves ample time to set up as we took in the soft moon glow and chilly air.  With the wind being a non-factor today, we didn’t have to worry about decoys sailing away.  We set two large groups of mallards and geese, with a gap to the north for a landing zone.  We strategically sat a little further back to the south to make sure that our cover would not be blown.  The morning flight was a sight to behold.  Thousands upon thousands of geese flew directly over our location to their feeding grounds.  The major dilemma was that few of them wanted to be where we were.  The groups that did peruse our locale flew directly from the south, and we were blind to their approach.  Playing a cruel game of Marco Polo, they twisted from behind us and circled in closer from the east where the sun was blinding our eyes.  Our equilibrium was jolted from their tactics, and the semi- reasonable shots we were able to take were terrible.  After the frustrating flocks flittered out of view,  we discussed where these birds might be heading.  Through our binoculars, we were able to ascertain that every duck and goose that crossed our path was traversing to a freshly planted winter wheat field. The field was a vivid green against the golden brown countryside.  The issue with these rich fields, is that farmers are often hesitant to allow access due to the wear on their field.  The bright spot of the morning was when Mike went a little crazy from the frustration of the morning.  With a group of snow geese dropping down low enough to take a shot, he yelled out like a blood hungry warrior as he fired two rounds and dropped a lone speckled belly goose from the flock.  Briar made the retrieve, I chuckled, and we managed to harvest one goose from the field.  When the sun lifter higher in the sky, we slowly packed our gear in solemnness after the anticlimactic end to our trip. 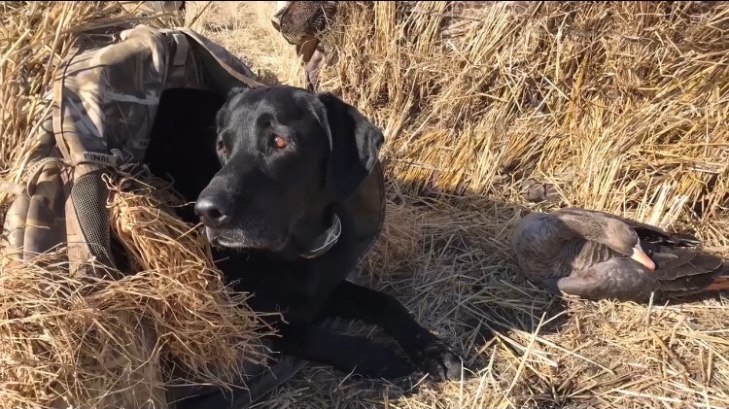 Relaxing in the truck on the return to the duck camp, our discussion turned to the mundane logistics of the journey home. Completely unsatisfied with the morning excursion being the end of our time abroad, I pressed Andy and Mike to drop me off at a flooded timber slough that we had come across a few days prior.  My plan was for them to drop me off with the bare essentials.  A bottle of water, my shotgun, six decoys, and desperation as a blanket.  This behavior is very uncharacteristic of me, as I would rather remain quite for hours versus stirring up a minute of turmoil amongst friends.  Following some diligent debate from my counterparts, they decided to join my fatuous crusade.  After a make-shift sandwich at base camp, we headed north to the marked location I had etched on the RM map days ago.  Traversing the back country roads, we made our way into a no-man’s land of sorts.  The landscape was so different than what we had seen previously in our scouting endeavors.  Laden with shallow marshes, leaf barren timber stands, and low plains, it was reminiscent of the land in which I was raised.  This instantly sent optimistic feelings to my core.   In the last mile heading to the marked location, we crossed a section of road that was innovative to say the least.  Due to the drought, a farmer had enough gumption to create a twelve foot wide road entirely of cattails, mud, and bramble to get his tractor to the other side of the property.  While we crossed this spongy land bridge, 30-40 feeding mallards caught our eye through the eerily dark flooded timber to our left.   We decided to move on to the flooded timber that I originally marked and witnessed a dozen edgy mallards loafing around the edges.   Andy came up with a hasty proposal to ride back to the flooded timber that we had previously bypassed and scare up the mallards in hope that they would promptly return to their vittles.  With Mike in the driver’s seat, Andy and I would ride on the tailgate with six decoys, a mojo, and our cased guns at the ready.  Finding the landowner on the RM map, we gained permission and made our way back to the timber.

If you look closely, you can see the twenty yards of muck/mud around the edge of the slough.

Dust filled our faces and eyes as we rode to the cattail road, (hanging on for dear life).   Just as we predicted, the mallards flew the instant the truck stopped and we edged through the labyrinth of dead alder trees, barb-wire fence, and muck to set our decoys.  Crouching low against the broader alders, we watched the mallards circle the far northwest corner of the slough before flying north and out of sight.  Although we were initially disheartened, neither Andy nor I dwelled on our circumstance for very long.  Tucked in the shade of the alders on a seventy degree day, our locale was impeccably relaxing after a week of toiling our tails off in pursuit of waterfowl.  My eyes didn’t have to wander far to take in the beauty of that place, it was already there in full view. Either by its own making or that of the dark timber, the tranquil water was a dark rust color and painted a majestic contrast against the bright blue sky.  The mild wind  blew against the thin leafless tree tops, rubbing the tips together and creating a soft audible lullaby.  Even the broken limbs of the alders lifelessly protruding from the water were a display of unblemished serenity.

While investigating moose tracks near my position, I caught a whirring noise coming from the north. Eight teal dropped speedily from the tree tops, flying ten yards off the water in their typical fighter-jet formation.  Neither Andy nor I were paying attention and were not rewarded for our day dreaming, as the teal flew hastily to the shallow cow pond 100 yards to the south.  Realizing our lazy quandary, we intently watched and waited, waited and watched. In the last hour of legal shooting time our newfound awareness would pay dividends.  While watching a bald eagle flying to the east side of the marsh, low guttural quacks filled our ears from the north, and we pulled our heads up to see a lone drake mallard dropping towards our spread.  The drake sharply pulled up to the right as we adjusted our guns, and began flying higher.  Andy began the barrage, and I followed suit with a single shot which sent the bird spiraling down to the water thirty yards to the east.  With an impeded view of its landing, I began to traverse the alder trees to retrieve my prize.  After reaching the area where I presumed it settled, I had an open view of the acre sized slough.  I initially expected to see one of two things.  The first being the bird floating lifeless on the water, the second being the bird quite alive and swimming away from me.  Unfortunately, I did not witness either.  There was relatively little concealment on the edges of the slough, but I looked feverishly through small brambles to see if I could find the stag cloaked by the camouflage.  Every nook and cranny I inspected was empty.  I spent fifteen minutes looking on the water with binoculars, and working the shoreline back and forth without anything to show.  Even when we sent Briar out to see if he could sniff out the bird from cover, we still failed to locate the downed bird.  Andy and I concluded that the only logical explanation was that the eagle we had witnessed pursuing our location grabbed the bird off the water while I was walking over to retrieve it.  A fitting end to our trip, we were again without a reward.  Standing next to the truck with our gear in disarray, we all shared a final moment as we took in the last gorgeous sunset on the Canadian prairie. 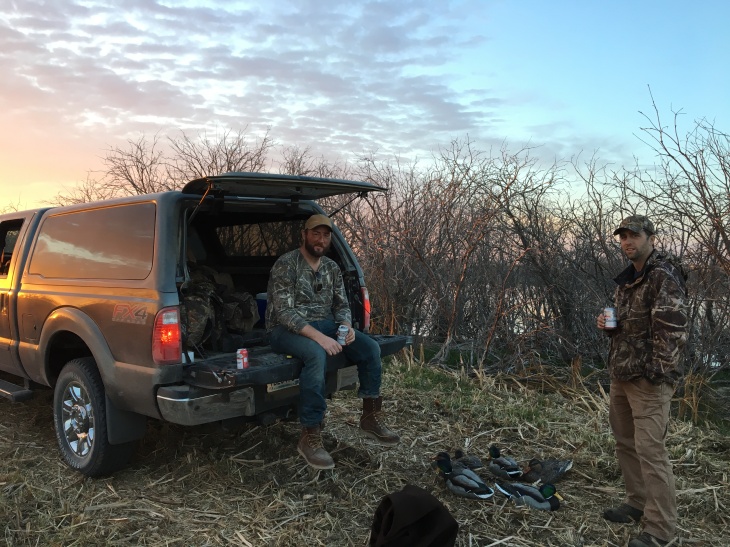 It was a tough adventure, tougher than I could have ever imagined. It etched a memory in my heart and mind that I will never forget.  A memory full of lessons and errors. It also solidified my understanding of what it means to pursue waterfowl without reservation.  Even though Mother Nature had warped its heart against us, we whole-heartedly gave every last ounce of effort without abandon.  That my friends is worth journey.  So I’d encourage you.  Whatever your interest or passion. When the tide rips, rip the tide. 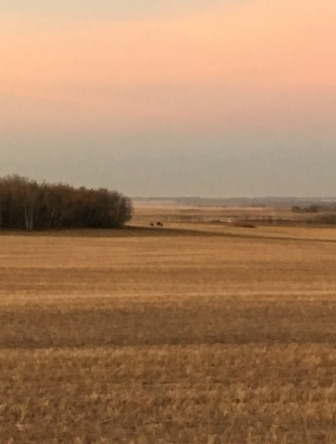 A cow moose with her calf