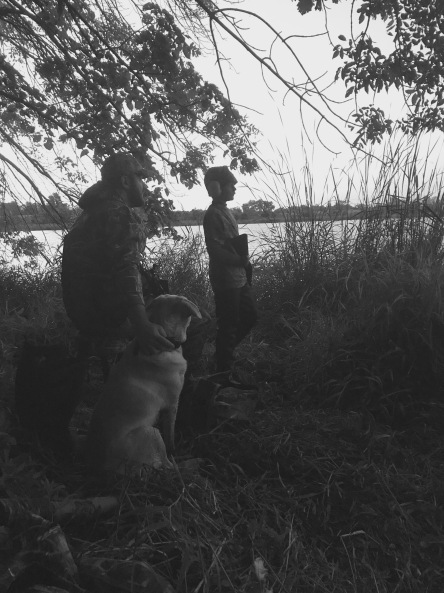 The rising sun split through the ageless oaks, exposing the juvenile wood ducks softly setting their wings to the jade colored water below.  The hunter slowly and quietly rose from his stool to take in the scene, firmly securing the bantam twenty-gauge to his shoulder.  A fumbling for the location of the safety, a seemingly endless pause, and the young hen wood duck was sent skittering to a halt.  The joy, the pure joy on his illuminated 11 year old face was beyond rewarding. I beckoned my squirming yellow lab for the retrieve, and we packed up to quickly get the young hunter to Saturday morning football practice.

It had been two years since I first approached my neighbor Max and his parents about taking him afield to pursue waterfowl.  Coming from a non-hunting family, he had an unexpected interest in the array of decoys carefully stacked in my dusty garage, and traditional waterfowl prints pinned to the walls.  “Can I try that?”- he inquisitively asked one sizzling summer day- “sure, but we need to do a lot of preparation first”, I replied.   His eyes slowly lowered to the floor at the thought of dram, school-like homework. I informed him that one does not simply go duck hunting.  “There’s firearm safety, clay shooting practice, and duck identification lessons that we need to accomplish before we can go.”  His eyes dipped lower yet as he grabbed his left arm with his right hand, apparently less than ecstatic with the perceived toil that would go into such an endeavor.  His eyes shot right up, and he gave me a sheepish smile when I said “but, we’re going to do those things so that you have the best time of your life.”

Over the next few months I tried everything I could to make his pre-hunting training more enjoyable. I had an older duck call that I hadn’t used in a few seasons, so I had a plan to give it to Max to practice with.  I stood at his front door as his mom apprehensively accepted the proposal, and he promptly darted around his living room, echoing obtuse notes that I never imagined a duck call could produce.  For the next five minutes, I tried to show him the correct technique, and instructed him to listen to duck sounds and quacks on YouTube.  However, my first foolproof plan to engage Max in waterfowling came to an abrupt halt a day later when his mom walked over to my door, promptly handing me the duck call.  “I just can’t take it anymore.” were the only words she uttered with an emotionally exhausted frown on her face.

I then entered Max into the First Hunt program by Delta Waterfowl, who in turn sent him a mentee packet with a shadow grass camouflage ball cap, a waterfowl patch, and enough stickers to plaster the walls of his room.  His excitement was difficult to miss as I pulled into the driveway after work one day.  He ran full tilt in my direction with camo ball cap on backwards, and fists full of stickers, shouting, “It came! My duck stuff came!”  His enthusing elation caused me to reflect on how I must have looked after I received my first bluebill decoys in the mail, or harvested my first drake Goldeneye.

After we went through extensive firearms safety lessons, I made it a point to visit the clay range with zero pressure on Max to shoot.  Reviewing the safety procedures and mechanics of the gun once again with him, he felt more comfortable attempting a shot.  We worked on swinging, leading, and focusing down the barrel of the gun before the first clay was thrown.  As the July sun beat down heavily on our brows, I handed him shell after shell without a direct hit.  I could sense that his patience was wearing thin, as he humbly handed the shotgun back to me.  “Let’s try one more,” I said optimistically.  He begrudgingly took his position and made his safety checks. “Pull!” he shouted.  The clay was sent whirling straight out, and magnificently shattered with the crack of the shot.  We looked at each other with excitement in our eyes, and awe in our wide smiles.  I roared, “Nice shot!” and we gave each other a barrage of high fives.

In the blink of an eye, I was standing next to Max and his dad at 5 a.m., quickly loading gear into my truck before youth waterfowl opener.  As we made our way down the steep hillside to the lake, I noticed a nervous bounce in Max’s step.  He settled down into the high grass lining the edge of the lake, taking in the scene with eyes straining through the pre-dawn darkness.  We both were delighted watching the birds careen across the cotton-candy sunrise, cautiously awaiting their abrupt arrival.  Suddenly, a hen green wing teal plopped down into the decoy spread, softly quacking greetings to her new friends.  A shaky shotgun missed its target and the frightened fowl bolted to a new destination.  Over the course of the morning there was plenty of patience and practice, and we were unsuccessful in bringing a bird to hand.  I could tell that Max was a little disheartened by the missed opportunities, but he perked right up when I told him that he did really well for his first time afield.  “Wait, we get to do that again?” was the jubilant question he practically shouted back.  I smiled, patted him on the back and said “As many years as you want buddy.”

If you would have asked me three years ago if I thought of myself as mentor material, I would have chuckled and dismissed the idea all together.  However, during the time that I’ve spent teaching and encouraging Max to pursue waterfowl, I’ve found that I’ve learned far more than I taught.  As a mentor, you get to experience the troubles and triumphs of your youth in the outdoors again.  This time however, you get to be a positive imprint on the next generation of outdoorsmen and women.  If you’re considering being a mentor to a youth interested in the outdoors, I would encourage you to be actively engaged in their development and training.  The relationship between mentor and mentee grows stronger, and it makes the victories afield so much sweeter.

“I don’t know….” the somber words of my friend as he grasped the door of my salt blanketed truck.  Stationary at the top of the hill, we gazed into the pre-dawn darkness at the lake we had scouted the day before.  With nighttime temperatures dropping into the low teens in late-November, a sheet of ice had formed from the shoreline to 30 yards beyond.  “I think we can do it” I said in an energetic, albeit brave voice.

I hustled down to the shoreline to test the thickness.  The frosty north wind scraped at my face as my heavy frame floated above the ice for the first five feet, then CRASH! My feet plummeted through the ice and I stood on the sandy bottom with water to my knees.  “It’s only an inch out here!”  I hollered back to my friend through the bleak darkness.  Warily, he started unloading the gear, discerning through a lifetime of friendship he wouldn’t easily sway my decision to hunt waterfowl in these treacherous conditions. Oh, I can definitely see his hesitant point of view, but it’s these types of edgy excursions that I wish I could relive for the 275 days of the duck-hunting offseason.  Call me crazy, but one day of testing my mettle against the harsh elements for a chance at weary and desperate migrating waterfowl, sounds better than a week in tropical paradise.

With our cumbersome equipment down at water’s edge, we made quick work of the shoreline ice as we cleared a path with a sledge hammer and paddles.  I pushed beyond the edge of the ice with my small motorized boat and set forth to our destination.

Watching the surreptitious shadows of the trees on the south shoreline, my stomach dropped to the floor as my boat jolted left to right, and a loud crunch filled my ears.  I bent my torso low to neutralize the sway of my boat, and continued to crush the half inch ice beneath the fiberglass bow.  Straining my head upwards, I could now see that the middle of the lake was covered in another sheet of ice from north to south.

Cold sweat beaded down my head as I realized the dangerous predicament I was in.  If I tried to turn my boat sharply to the left or right, I would most certainly catch the edge of the ice, and flip into the icy water below.  At this point I was completely committed and knew the safest way to proceed was forward.  I began to feel a little more calm as I periodically turned back to see the headlamp of my friend following a distance behind me.  If I did tip, he could cruise through the path of my boat to give me a helping hand. I finally arrived at the point that we were headed, and to my delight, the ice had not formed as heavily around the edge, and we were able to set out our array of decoys with relative ease.

As the ruby hued dawn approached, we methodically concealed our boats and settled into the sheltering cattails.  I opened my coffee thermos, and drank in the hot black liquid as well as the blood orange sunrise before me.  In a matter of 15 minutes, the first few aerial silhouettes appeared in the sky.  Darting to and fro, north to south, they buzzed by with incredible speed, looking for friendship in an inhospitable landscape.

It didn’t take long for a hen ring-neck to pay a visit to our imitation.  “One on the board!” I pronounced, as I grabbed the boat to row out to our downed prize.  Over the course of the morning, we had flocks of mallards, ring-necks, and a gadwall cup their wings and careen into our spread without hesitation.  Desperation was their demeanor, and we were catering to their quandary.

The highlight of the morning came in the form of a flock of a dozen geese.  Flying south, they soared above our position with no inclination to land close by.  Having little luck with Canada geese over the water, we blew our calls fervently to gain their attention.  To our absolute astonishment, the lead goose sharply swung northward in our direction, and committed its loyal wings.  Our bodies were locked motionless in the moment, and we patiently let them hover above our spread before beginning our barrage.  Two ganders lay in the water, and my friend paddled victoriously to retrieve them.

In route to the access, my blazon trail was still visible across the entirety of the ice locked lake.  A testament to the dangerous venture we had taken the morning.  Following the open path, I breathed a deep sigh of relief when we both crossed through the end of the ice safely.

Although the risks were great and the outcome uncertain, we completely committed ourselves to the desperate journey, finding personal resolve in the deep cold waters of northern Minnesota.